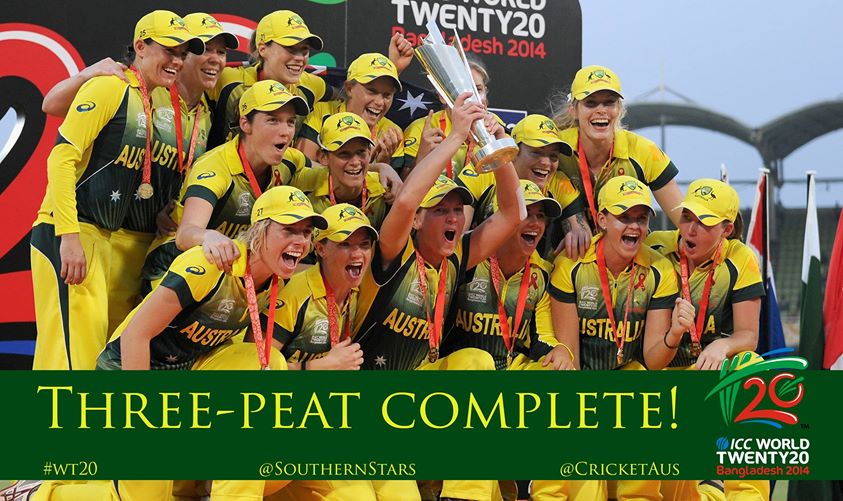 It’s not the most satisfying way to follow a game. Granted, the Twitter banter between Adam Gilchrist and Michael Vaughan was an entertaining alternative to the live action.

Celebrating this win far too much now @gilly381 …. pic.twitter.com/FrzmMqEMRt

But reading on Twitter that another English wicket has fallen or on the ABC live feed that Aussie captain Meg Lanning has tonked another six does not get you leaping off the couch doing multiple fist pumps. For that you need to be able to see the actual game, especially when it involves Aussies slicing and dicing Poms as our Southern Stars did so meticulously.

I wasn’t the only one that felt this way. All yesterday, whenever Cricket Australia or the Wide World of Sports encouraged their Facebook followers to get behind the Southern Stars, they copped an earful about the game not being televised on free-to-air TV. Particularly when GEM was screening the men’s final and Australia wasn’t even in it.

Their message was clear: We’re on board, why aren’t you?

Which is true, of course. But they also sell those rights. And in a media release on 29 August 2012, the Nine Network announced: “Channel Nine will bring free-to-air viewers the action from all the big games in the 2012 and 2014 World T20 tournaments.”

All the big games. Except the ones with women in them.

If Nine’s rights didn’t include the women’s matches, then they bloody well should have. It’s not as if Australia was the dark horse coming into the tournament. We’d already won the last two World Cups. It was a fair bet we’d be there at the end.

As for those who say people don’t want to watch women’s cricket, how do we know if we never get to see it? Who doesn’t front up to watch Aussies beat Poms? At anything? Saddle up a pair of cockroaches representing the two old enemies and you’ll get an audience.

There were moments of this tournament we really should have seen. Like Meg Lanning hitting the highest score in women’s T20 history, 126, in a record-breaking game against Ireland. Australia’s hard-hitting victories against South Africa and Pakistan. And, of course, yesterday’s final in which the Aussie girls completely humbled the opposition. Or so I read.

It’s not like Nine hasn’t broken new ground in this area before. In 1983, it appointed the world’s first female commentator. Admittedly, it was actress Kate Fitzpatrick, whose only connection to cricket was a fling with Imran Khan and whose short-lived stint in the commentary box focused largely on the striking qualities of Qasim Omar’s eyes.

And while Nine hasn’t been game to try again, it recently announced sports presenter Yvonne Sampson would be brought into hosting duties next summer, while promising there would be a woman giving ball-by-ball commentary ‘in due course’.

Come on, guys, it’s been 31 years! Time to dip your toe in the water again. There’d be no shortage of Aussie women players ready and willing to step up with expert commentary.

The heartening thing in all of this is that most of the people voicing their disappointment at not being able to watch yesterday’s final were men. The fact that Gilly and Michael Vaughan were glued to their sets for the whole game is also encouraging.

So the next time the women’s cricket rights are up for grabs, I look forward to some aggressive bidding. And to watching the Southern Stars take their fourth crown. Instead of reading about it.