On Monday, I had breakfast with Adam Goodes. Me and a couple of hundred other people he mostly doesn’t know.

Listening to him in conversation with Adam Spencer, I was glad I hadn’t chosen a career in Aussie Rules, or any professional sport, with all the training and the injuries and the diet and the rigid regime. Not to mention the ice baths.

As a two-time Brownlow medallist, Goodes is very good at his job. One of the best. No doubt he’d love to just get on with that job. But circumstances demand otherwise.

The discussion inevitably turned to that bleak moment almost a year ago when a 13-year-old girl called the Sydney Swan an ape. And of how, just a few days later, his friendship with Eddie McGuire ended over some poorly chosen words suggesting Goodes could promote the King Kong musical.

It can’t be easy to keep rehashing these episodes for audiences such as ours. You could understand if he wanted to lash out like a frustrated Bondi billionaire.

But Goodes has chosen a more dignified path. And here’s the thing. For all the terrific things he does on and off the field, it is in the way he has tackled the pernicious thought bubble of racism that he has risen to greatness. It is part of the package that has made him Australian of the Year.

Racism makes idiots of some and reluctant heroes of others. In the past couple of weeks, we’ve seen plenty of both.

Exhibit A in the idiots corner is David Campayo, a Villareal football fan who threw a banana at Brazilian international Dani Alves as he lined up for a corner.

Alves picked up the banana, peeled it, took a bite, discarded the skin and kicked the ball. He turned ridicule into a snack. If that wasn’t impressive enough, he later called for leniency towards Campayo, who faces jail time.

“I don’t believe in paying evil with evil.” Dani Alves

Back in the idiots corner, Los Angeles Clippers owner (at the time of writing) Donald Sterling is our Exhibit B. Banned from the NBA for life after telling his girlfriend not to associate with black people or bring them to the games, did he take the time to reflect and chow down on a big bowl of contrition soup? Hell, no.

“I wish I had just paid her off,” he said, more concerned his sweet had leaked the tape than for any offensive content it might contain. Meanwhile Sterling’s wife sits at home playing Bizarre Love Triangle on a continuous loop. 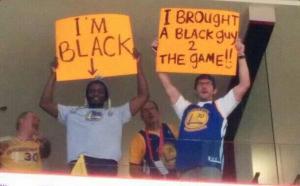 We may never eradicate racism. But thanks to the efforts of these guys, we know a lot more about it and the harm it causes. Their example empowers them. It empowers us all.