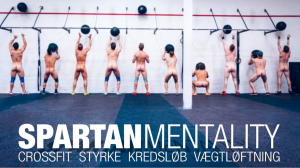 It’s the April Fool’s joke that went unnoticed for two months. Only last week, a number of media outlets around the world carried the story about a Crossfit gym in Denmark called Spartan Mentality that had started offering nude workouts.

The bloke that came up with the idea said: “People are already so scantily clad at Crossfit that we thought we might as well throw the rest away.” Behind him, bare buttocked men threw medicine balls and lifted weights. One was in a deep squat best viewed with trepidation.

Hailing as it did from Scandinavia, the story had more than a whiff of credibility. But after a blaze of belated publicity, the gym sheepishly revealed the whole thing was intended as a 1 April joke.

While we may have been spared on this occasion, my punch drunk eyeballs have discovered there’s a disturbing amount of nude sport out there.

The Nude Rugby International held in Dunedin pits the Nude Blacks against a different team each year. Spectators are careful how they say: “Nice tackle.” I wonder if play is ever disrupted by someone running on to the ground fully clothed.

In Germany (you just knew the Germans had to feature in a story about getting your kit off), there’s the annual Naked Sledding World Championship. Pert well endowed women go head first down the slope wearing only their knickers, ski boots and crash helmet and praying their boobs don’t get stuck to the sled.

Also in Germany, the first ever Women’s Naked Soccer Championships was held last year. No one knows why. Ladies from Italy, France, Sweden and Germany ran around wearing nothing but knee high stockings, white or black depending on which team they were on.

I’m not sure who won. That didn’t seem to be a focus of the media coverage. But it does raise possibilities for the upcoming World Cup.

Now in its 10th year, the World Naked Bike Ride is held in around 20 countries. Participants are invited to ride as ‘bare as you dare’ in support of everything from renewable energy to positive body image.

Last year, 400 people took part in a naked run in the Netherlands in support of Pussy Riot. Stop snickering. And let’s not forget sumo wrestling.

Of course, nude sport has been around in one form or another since the ancient Greeks picked up a discus.

And maybe there are wider applications in modern sport. Nude tennis would relieve Rafael Nadal of the need to pull his undies out of his clacker before every point, though Novak Djokovic’s spreadeagled defence shots wouldn’t leave much to the imagination.

Nude cricket could be one way of fighting ball tampering. I’m sure Warney would have been up for it in his day.

Naked golf would give us respite from some of the glaring clobber that currently makes its way around the greens. Nude pole vaulting would add another degree of difficulty in clearing the bar.

Just as long as they don’t introduce nude darts.