Somewhere in the past week, Rupert Murdoch has become a rugby union fan.

Yet since Monday, there have been three in a row about rugby. Including one sticking the boot into the Poms.

Great win by Australia at Twickenham. Can't wait for final against great All Blacks next Saturday. Ignore complaints from whinging poms. 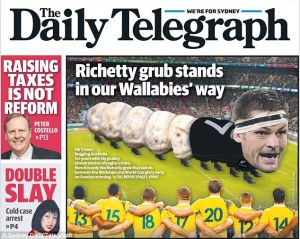 At any rate, we can thank the Murdoch press for one of the best sledges ever, courtesy of  The Daily Telegraph, which renamed All Blacks captain Richie McCaw a ‘Richetty grub’ for his mastery of ‘the dark arts of breakdown cheating’.

“Adept at using its knees and elbows freely on a rugby field, it has been officially registered as a pest in Australia,” was how the paper described the species, while also defining Sunday’s match referee Nigel Owens as a ‘Richetty grub connoisseur’.

Fortunately the grub is an endangered species and may not be seen again after this weekend.

The other great call of the week came from the tweep who likened Wallaby Bernard Foley, he of the magic boot, to actor Eddie Redmayne. Let’s just hope Bernie brings some of Eddie’s Oscar-winning form to Twickenham.

With Halloween descending on us this weekend, FIFA has decided to take its own horror show to new levels for the occasion.

Septic let slip the executive committee had agreed to give the 2022 World Cup to the US before Platini switched to Qatar. Confirming all suspicions that these exercises in free voting are rigged tighter than a Sydney to Hobart yacht.

“FIFA is working well,” Septic assures us. “I think this crisis — and this is also the idea of my lawyers — has nothing to do with any criminal activity. Has nothing to do.”

Meanwhile, the list of candidates for Septic’s job has been released. It includes names like Jerome Champagne, Gianni Infantino and Tokyo Sexwale. Better than fiction, this yarn.

Still on a Halloween theme, these guys are trying to suggest Jordan Spieth costumes are all the rage this year. Yep, scary stuff.

This is the year of the @JordanSpieth Halloween costume. Can anyone top either of these (adorable) examples? pic.twitter.com/d7AnZsnqJX

Not as scary as the stuff coming out of Lewis Hamilton’s mouth after he won his third Formula One title last weekend.

“The sky is not the limit,” he enthused. “I think there is no limit to what I can go out and achieve.”

I can think of two things, mate. Childbirth and humility.

Fresh from knocking down a Japanese kid playing a friendly game of street rugby, London mayor Boris Johnson has tried his hand at tug of war. Here’s how that went.

Former tennis ace Marat Safin reckons it’s much easier to win a Grand Slam these days than when he was running around the court.

“Back then was a bit different,” he says. “Just a little bit too ridiculous compared to now. Back then was much more quality players, much more.”

I reckon Marat could earn himself a gig with the Four Yorkshiremen.

Roger Federer has been busy channeling his inner badass, encouraging Australian Open ballkids to break the rules and ask him for his autograph.

“I was a ballkid for two years,” he says in an Aussie Open video. “I used to love it — chasing the players down for autographs and for pictures. I’m not sure if you’re allowed to do it, but if you’re not, you can always ask me. I’m totally cool about it.”

Speaking of cool, picture this. You’ve just scored a goal and in that moment you’re the coolest person on the planet. You saunter over to your team’s fans to bask in their amazement at your unworldly skills.

And it all goes horribly wrong.

Let’s hope the All Blacks are similarly upended at Twickenham.

Have a good weekend, everyone. And go Wallabies!