Baseball and babysitting. Not two words you’d expect to see in the same sentence, except: “Would you mind babysitting my brood while I go to the baseball.”

But the retirement of an ageing major league baseball player last week has triggered an unlikely child care debate in the US.

Chicago white sock Adam LaRoche took his bat and went home, not because his body was failing him, though at 36 and sidelined by recent back spasms, there are clear signs it is.

No, he quit because his club asked him to leave his kid at home. That broke an agreement made when he joined the White Sox and the club said he could bring his son along whenever he wanted. 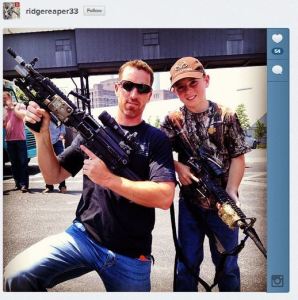 No doubt the White Sox thought the youngster would drop in every now and then. But 14-year-old Drake wasn’t an occasional fixture in the clubhouse. He was there every single day. He even took part in the training drills. He became known as the club’s ’26th man’.

The White Sox had unwittingly signed two LaRoches for the fairly exorbitant price of one. Still, it was preferable to some of their other father-son pursuits.

At any rate, people started getting jack of it. Who and how many, we’re not sure, because no one wants to takes the rap for punting a teenager.

But it’s emerging that at least a few players weren’t thrilled by the kid’s constant presence in the office, pleasant though he was.

It was left to club official Ken Williams to let Papa LaRoche in on the secret that the White Sox is in fact a business enterprise and not a day care centre.

He’s since been painted as the villain of the piece, a rung below Donald Trump on the scale of people you can trust.

The only other person I can recall who took their child to work every day was Yahoo boss Marissa Mayer, whose idea of work-life balance was building a nursery in her office so she could return to work about 13 minutes after giving birth.

Mayer’s actions were considered extreme. Especially when she banned her employees from working from home.

LaRoche has fared much better in the courtroom of public opinion. Yes, some have suggested there might be better places for Drake to spend his time. Like school maybe.

(Drake is home schooled. It’s so hard to find a suitably baseball-loaded curriculum in a standard classroom these days.)

Otherwise, LaRoche is being hailed as father of the year because he chose his family over $13 million, while a debate rages as to what constitutes appropriate child care in today’s workplace.

Some wags have set up a mock fundraising campaign to get the LaRoches through the year.

There is now a GoFundMe to get Adam LaRoche and his son "back on their feet" https://t.co/jZEQCLfIxk pic.twitter.com/GaFkF58rEv

And look, it’s great that LaRoche wants to spend quality time with his son. But is it possible to have too much quality time? At what point does father and son bonding fuse into something more rigid? When do we call LaRoche out as a helicopter parent?

My 10-year-old daughter enjoys the occasional visit to my office during school holidays. She loves riding the elevators, the clickety-clack of heels on the marble floors and catching up with those of my colleagues she ranks as her friends.

But I’d be concerned if she wanted to do it every day. I’d wonder about her powers of imagination. And my own management of the apron strings.

Admittedly, playing major league baseball is a little more exciting than what I do for a living. No doubt the thrill of the ball game can beguile a young mind.

Regardless of circumstance, I’d hope that my daughter would find footsteps of her own rather than following in mine like a living shrine to her parent.

Thank u Lord for the game of baseball and for giving me way more than I ever deserved!#FamilyFirst

I find parenting to be a constant lesson in letting go, in knowing when to permit your child the next passage of freedom.

To allow them to develop their own identity, you have to be prepared to expose them to influences other than your own.

The greatest reward is watching your child embrace the world as it’s opened up to them, seeing how they engage with it and how it shapes them as they explore ever broader horizons.

Maybe Drake could use some time away from his father’s field of dreams.