The Third Test between Australia and South Africa was always going to be a grudge match to put the Reinhart family tiff in the shade. These two sides aren’t exactly at the top of each other’s Christmas card lists at the best of times. But in the course of this series, their volatile relationship has reached new heights in incendiary.

Let me set the scene for you. Coming into this series, the South Africans hadn’t lost a Test series in five years. The last side to hand them their backsides on a plate was, you guessed it, Australia. In 2009. On South African soil.

Fast forward to a couple of weeks ago. South Africa is cemented firmly at the top of world Test cricket. And determined to stay there. In jets a planeload of Aussies, drunk on a 5-nil Ashes whitewash, but in the 12 months prior to that unable to focus long enough to win a Test, let alone string together a series. 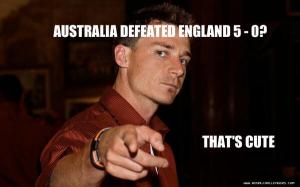 No one seriously expects them to pose any major threat to the mighty Proteas. Least of all the Proteas. But then the unimaginable happens. Australia humbles the home side at Centurion, the freshly moustachioed Mitchell Johnson taking a career best 12 wickets.

Suddenly, this world domination thing looks easy again. Off we head to St George’s Park, where the South Africans put us back in our box, turning the tables by an equally compelling margin.

And so it all comes down to the final game at Newlands. We know we’re in for a tussle and so do they. But the Proteas are confident because they’re the number one side in the world. And they’re playing at home. And the last innings we played at Newlands we scored just 47 runs.

But someone does. South African captain Graeme Smith is steaming. He dismisses Warner as ‘a bit of a rent-a-quote’. His side goes into the game with Warner well and truly in its sights.

Warner feels so intimidated he scores a century. The $3,000 he’s fined for his comments are worth every cent. But there’s more drama to come. In walks Aussie captain Pitbull Clarke, down on his runs and desperately needing a big score. The Proteas work him over like Cassius Clay, pummelling the short ball into his ribs, his arms, his face.

Clarke feels so intimidated he scores a century and a half. It’s a knock for the ages, one we’ll tell our grandkids about. It’s so exciting, our new consultant Shane Warne sleeps through it.

We rack up a healthy score and get the Saffas out cheaply. So cheaply we could enforce the follow-on. But we decide to bat again.

Warner takes up where he left off and scores another century. Just like Phil Hughes back in 2009. It’s all too much for Graeme Smith, who announces his retirement. He can’t handle the heat, so he’s getting out of the kitchen.

It all goes according to plan. Some wickets fall and the mighty Graeme Smith walks in for his final innings in Test cricket. The Aussies give him a guard of honour. He faces just three balls, then Mitchell Johnson sends him back to the pavilion. Thanks for coming, Biff. Enjoy your retirement.

We enter the final day with our tails up and hopes high. We’ve got six hours to get six wickets. What could be simpler?

And then, nothing. The South Africans, notorious for digging in, dig in. Even the nightwatchman lasts an hour and a half. It’s agony to watch and I’m glad I don’t have pay TV so I can’t.

The hours tick by. Here and there a wicket falls. In the dressing room, the South Africans are counting down the overs left to play. The overs left to survive. It gets down to 15 when we claim the wicket of Vernon Philander. But it gets overturned on review. The Aussies are apoplectic. Pitbull and Dale Steyn, allegedly the world’s best bowler now trying to save a Test match with the bat, almost come to blows.

By now the South Africans have stopped counting the overs left to survive. Now they’re counting balls. It gets down to 30 and the Newlands crowd is beside themselves at the prospect of an epic draw.

Pitbull hands the ball to a hobbling Ryan Harris, Australia’s old man of cricket. His knees are stuffed and he’s a year or two away from a zimmer frame but there’s nothing wrong with his ticker. It takes him just three balls and the last two stubborn wickets are gone.

It’s all over. We’ve won. Even Warney’s awake for that. To rub salt into South African wounds, Dave Warner is named man of the match and man of the series.

The win takes us to number two in the rankings. South Africa stays at number one. But we know where we really stand. And what’s more, so do they.