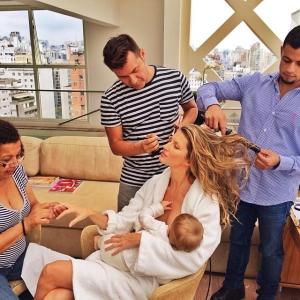 To get an idea of how charmed Tom Brady’s life is, take a look at  this photo of his wife breast feeding.

Yes, that’s supermodel Gisele Bundchen. She posted this picture on Instagram 18 months ago. And was bewildered that it somehow failed to resonate with other mums of the world.

“What would I do without this beauty squad after the 15 hours flying and only 3 hours of sleep?” she asked. Then she added the hashtag #multitasking. As if she was the one doing her hair, nails and make-up.

Seriously, if all women could nurse this way, with manicurist, hair stylist and make-up artist in doting attendance, kids would be breast fed well into adulthood. By mum and dad. This Little Britain scene would be played out in every home on the planet.

Suffice to say, Brady and Bundchen do not inhabit the world of us mere mortals. They’re the Posh and Becks of American football, once the world’s highest paid celebrity couple. He rakes in a smidge under $40 million a year. She’s the actual breadwinner of the family.

They exude glamour, she with the model looks (being a model and all), he classically apple pie handsome, even if he does bear a slight resemblance to Lurch from the Addams Family.

Last month, she wrapped up 20 years on the runway because her body ‘asked to stop’. He’s practically the Patriots’ team mascot, regularly leaving the field with a Most Valuable Player award.

She meditated her way through childbirth. He intervened before she could name their first-born River. “I wanted something always flowing, immortal,” she explained of the name choice.

They settled on the flowing, immortal name of Benjamin. According to my research, this is their only documented argument.

But Brady’s got a much bigger problem now. ‘Tom Brady’ and ‘scandal’ are being mentioned in the same breath. And it’s not even a cool scandal. Instead, he’s at risk of becoming a laughing stock, as the central figure of Deflategate.

You see, apparently Brady likes his balls soft. Makes them easier to play with, especially in cold weather. And it’s claimed his balls weren’t nearly hard enough in the game that sent the New England Patriots through to this year’s Super Bowl. 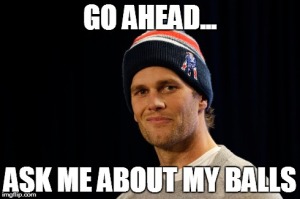 The NFL takes a very dim view of squishy balls. A dimmer view than it does of domestic violence, it seems. The four-game suspension dished out to Brady is twice the initial leave pass given to Ray Rice for punching his partner in an elevator.

The Patriots are playing hard ball now, though. They’ve poked all sorts of holes in the NFL’s investigation, right down to claiming that the staffer overheard calling himself the ‘deflator’ was actually referring to his wish to lose weight. Kaboom.

Brady’s also tried to put the matter into perspective. “This isn’t ISIS,” he said. You know you’re in trouble when you bring a terrorist organisation into your argument.

The star quarterback’s appealing his suspension and plans to call NFL Commissioner Roger Goodell, seen here with Brady in happier times, as a witness. Which could be interesting considering Goodell’s the guy presiding over the appeal. He might be running between two seats at the hearing.

Deflategate. It’s a lame name for a scandal, isn’t it? It’s the kind of term politicians might throw at each other across the parliamentary chamber.

Brady’s dad calls it Framegate. I reckon we’re inches away from Litigate.

As for any enduring impact on Brady’s reputation and earning power, well that remains to be seen. But the lampooning is in full swing.

Let’s just hope Gisele doesn’t have to go back to the runway.