Forget the investigations over bid corruption and concerns over the abuse of construction workers. David Beckham reckons we should all support the 2022 Qatar World Cup.

“Whether it’s corrupt or not, those countries have been chosen. People need to get behind that,” Becks told Radio Times. “It’s about bringing football to new countries. They should stick with it. They’ll make it work.”

Yeah, whether it’s corrupt or not. No biggie. Adds a whole new meaning to ‘bend it like Beckham’ though.

Maybe you should stick to what you do best, Becks.

Though it has to be said soccer’s ‘governing’ body is hard at work on reforming its what’s-a-few-million-dollars-between-friends ways.

Look at him. He’s a force of nature. Absolutely unstoppable. I’m exhausted just watching him.

Yellow carded twice by a female referee, Demirbay let loose while leaving the pitch, claiming women have no place in football.

He was forced to referee a junior league girls’ game for his troubles. I just hope there were some soccer dads on the sidelines giving him lip.

Donald Trump took issue with a speech by US President Barack Obama in which he pointed out some of America’s sports heroes are Muslim.

This had the Trumpet scratching his head.

Obama said in his speech that Muslims are our sports heroes. What sport is he talking about, and who? Is Obama profiling?

The poor old Golden Combover couldn’t think of one Muslim sports star. Not one. Not even this one, the greatest of them all, who has shaken his hand and given him stuff.

But Muhammad Ali wasn’t going to let old age and Parkinson’s disease keep him out of the fight.

In a statement headlined: Presidential Candidates Proposing to Ban Muslim Immigration to the United States (that’s code for Don), Ali said: “I am a Muslim and there is nothing Islamic about killing innocent people in Paris, San Bernardino, or anywhere else in the world.

“I believe that our political leaders should use their position to bring understanding about the religion of Islam and clarify that these misguided murderers have perverted people’s views on what Islam really is.”

I’m giving it to Ali on a technical knockout. 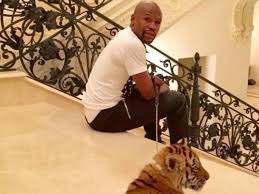 Boxer, motor mouth and serial abuser Floyd Mayweather was showing off his latest toy this week, a brand new tiger given to him for Christmas by ‘my family here in Moscow’.

Animal rights groups were quick to pounce on the idea of Floyd owning a big cat. But I can see one big plus. It just might eat him.

Indian cricket star Virender Sehwag has found an interesting way to bring out the best in his kids.

He’s offered to buy them a Ferrari if they match his high score of 319 in any form of cricket.

“It is a motivation for them,” he says.

For the record, his kids are eight and five. He could probably have bought them off with 20 buck worth of Lego.

Georgian weightlifter Shota Mishvelidze may want to work on his technique following his performance at the International Weightlifting Federation world championship in Houston.

Or maybe take up another sport. Like fly fishing. Or chess.

Have a good weekend, everyone. Don’t forget to breathe.