In the end, it all happened very quickly.

One minute he was there and then he was gone.

The man who just a few days ago declared euphorically to be the ‘President of everybody’ suddenly wasn’t feeling the love anymore.

“I do not feel that I have a mandate from the entire world of football,” he lamented to an almost empty FIFA press room in Zurich.

Meanwhile, down at the FBI, they were doing a kids’ nursery rhyme with a bit of a twist.

There were nine with the Feds

And the investigators said:

Roll over, roll over.

So they all rolled over

And the Prez fell out.

Or at least that’s the picture being drawn by anyone with a passing knowledge of join-the-dots.

And so Sepp is leaving, presumably to spend some quality time with his lawyers and dance the watusi with the FBI.

But he’s not stepping down immediately. No one knows exactly when but there’ll be plenty of time to give the shredders a workout.

And while his departure can only be good for the governance of the Beautiful Game, we should take a moment to mourn the comic genius we’ll be losing in the process.

Even in his darkest hour, Sepp couldn’t resist cracking jokes. 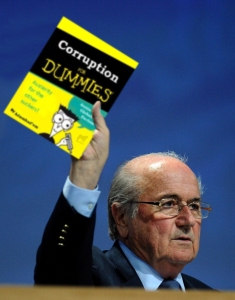 In his remaining time as President, when he’s not at the shredder, he’s going to focus on ‘profound reforms’. Because 17 years simply wasn’t long enough.

And after all this time in the top job, he now wants to limit the presidential term. He’s talking ‘deep-rooted structural change’ and centralised integrity checks. Comedy gold.

“I have fought for these changes before and, as everyone knows, my efforts have been blocked,” he said. Stop it, Sepp, before I wet my pants.

“Imagine a more pompous George W. Bush without a teleprompter and you can get an idea,” he wrote after Blatter’s resignation.

So, to commemorate Sepp’s demise, we’re running our first ever quiz. Some of the quotes below came from Sepp’s silver tongue and some I completely made up. See if you can spot the difference.

And thanks for everything, Sepp. There’ll never be another one like you.

Did Sepp say that – or not?