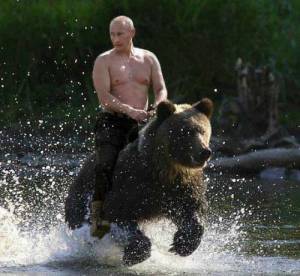 We know how much Vladimir Putin loves his sport, whether it’s riding horses, carving up an ice hockey rink, throwing blokes to the judo mat or generally being a manly man.

But it seems there are some physical pursuits Vlad just can’t abide. Gay sex, for one. And yoga.

Now you’d think someone with the consummate ability to stick their head up their own bum would be a strong yoga advocate. But not Vlad.

According to his lackies in the Russian city of Nizhnevartovsk, yoga is “inextricably linked to religious practices” and must be stopped to “prevent the spread of new religious cults and movements.” So it’s been banned.

Don’t take this lying down, people. Assume the warrior pose. And breathe.

To matters soccer, you’re in the 92nd minute of a World Cup semi-final. The scores are level. You’re conserving your energy for the 30 minutes of extra time that’s about to be played.

The ball comes your way, you stick your foot out and, almost without trying, send a perfectly lofted kick over the keeper’s head, on to the crossbar and over the line for a goal.

So, it will be a US-Japan World Cup final on Sunday. But one person who won’t be there, for the first time in his presidency of soccer’s ‘governing’ body, is Sepp Blatter.

Sepp’s decided not to travel to Vancouver for ‘personal reasons’. Which could be code for ‘fear of arrest’.

Such a shame for the FIFA boss. We know how much he likes the ladies.

But he’s left us with this quote to show us what on iron grip he has on the game. And reality.

“The ball is round – but only those who come from outer space know the actual dimensions of our sport.”

Someone else who had the wobbles this week was motorcyclist Niklas Ajo, who came up with a unique race finish at the Dutch Grand Prix.

With these talents, Ajo could run away and join the circus.

Canadian tennis player Eugenie Bouchard caused quite a stir at Wimbledon, despite only being there for the nanosecond it took to lose to China’s Ying-Ying Duan in the first round.

The cause of concern was that she appeared to be wearing a black bra, in direct contravention of Wimbledon’s ‘all-white’ dress regulations.

The All England Lawn Tennis and Croquet Club makes it clear the rules extend to knickers.

“Any undergarments that either are or can be visible during play (including due to perspiration) must also be completely white,” it says. You can almost hear the plum in the mouth, can’t you?

Aussie James Duckworth didn’t attract anywhere near the same attention, or indeed any attention at all, despite it being very clear by the end of the second set of his match against Sam Groth that he was wearing blue undies beneath his sweat-soaked shorts.

After a short break, he came back for the third set wearing a fresh shirt and, to my eye, less obvious duds. So maybe the umpire had a quiet word to him at the change of ends.

Finally, for anyone who’s having a bad day at the office, spare a thought for this guy.

This is a reminder that baseball is hard, as demonstrated by Jeff Francoeur: http://t.co/Ur4NkTJbtK pic.twitter.com/HnSMKxX4Ga