Here are the six most stupid words uttered this week — and it’s not even something Donald Trump said. 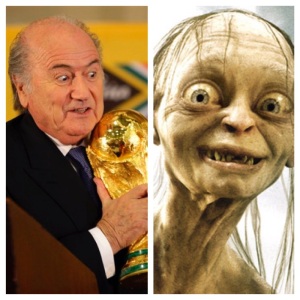 Now, I know the president of soccer’s ‘governing’ body has said some dumb things in his time, from the tightness of women’s shorts to the possibility of World Cups with aliens, but this week he’s surpassed even himself.

Here’s what he said.

“There is no corruption in football.”

Yup. So, how does Septic explain the corruption investigation involving at least 14 of his officials?

“The institution is not corrupt,” he explains. “There is corruption with individuals, it is the people.”

Of course it’s the people, you knucklehead. Quite a lot of people, it appears. How else does money change hands?

But Bladder assures us he’s clean. “I’m not a worried man,” he says. Yeah, but he’s not travelling to the US any time soon.

Bladder’s not the only laughing stock in football. Sunderland striker Jermain Defoe has placed an ad for a 24/7 personal assistant to, among other things, create a global brand for the Jermain Defoe name, grow his online profile, produce his iPhone apps, manage the Defoe family schedule (including pets), raise his media profile (Defoe has kind of done that with his ad), organise holidays, manage the dry cleaning, gardeners, cleaners, house refurbishments and interior designers, look after the house while Jermain is travelling, organise Jermain’s wardrobe for special appearances, stock the fridge and sundry other tasks.

The guy doesn’t need a personal assistant. He needs an intervention.

Over at the World Championships in Beijing, Usain Bolt has claimed the 100 metres and 200 metres sprint double.

And while they weren’t able to beat him on the track, a Chinese cameraman showed how to bring him down. Pretty simple, really.

This week saw the retirement of Sri Lankan cricket great Kumar Sangakkara after 134 Tests. Having scored 12,400 Test runs at an average of 57.40, the highest batting average of anyone with more than 100 Tests under their belt, just about everyone on the planet was lining up to heap praise on him.

Except his dad. He’s the cheerful chap on the right.

Sangakkara Snr wrote in The Indian Express: “For the world, Kumar was this venerated technician. But in my opinion, he never reached that level. He could have done so much better with the skills he had.”

As to what Sangakkara will do post-cricket, well, the Sri Lankan president has offered him the post of Sri Lanka’s High Commissioner to the UK. Where at least he’d be a long way from his father.

And let’s just be grateful for a moment that John Howard never made the same offer to Shane Warne.

And in what I hope will be my last mention of the Ashes, the BBC has decided to have a laugh at our expense by suggesting some memorabilia the beaten tourists might like to take home with them. 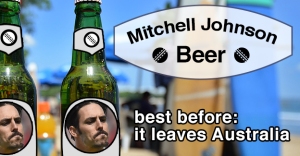 There are t-shirts emblazoned with “At least you tried”, “Stay calm and go home empty handed” and our first innings at Trent Bridge.

Plus there’s a beer, of course, to help us drown our sorrows.

Have a good weekend everyone. And bottoms up.