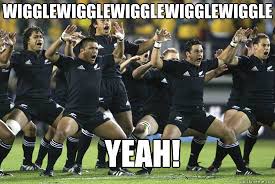 When the Rugby world Cup comes around, it’s always good to make fun of the All Blacks when you can. Which turns out to be pretty easy when they’re playing away from home.

The All Blacks have only claimed the Webb Ellis Cup when the tournament’s been played on their turf.

And Japan’s shock win against South Africa seems to have spooked the defending champions, who did their level best to lose their opening encounter to Argentina.

All Black captain Richie McCaw was the main culprit, earning himself a yellow card and a stint in the sin bin for tripping an opposing player right under the ref’s nose.

“Pretty dumb,” was how his coach Steve Hansen summed up McCaw’s errant footwork. “Sometimes in the heat of the moment you have a wee brain explosion.” Keep ’em coming, Rich.

“The haka is done as a way of honouring the enemy,” says Sir Pita Sharples. And no, he’s not a character in an Agatha Christie novel.

Pull the other one, Sir Pita. As great a spectacle as it is, the haka is done with the sole purpose of putting the other team off their game. End of story.

So if Dawson’s camp little dance can help even up the balance, all power to him. The All Blacks reckon the English version is ‘quite funny’. See what you think.

You might want to sit down for this next story. Having spent the past couple of years throwing his toys out of the crib, England cricket bad boy Kevin Pietersen has had an epiphany.

He now claims Andrew Strauss made the right call in leaving him out of the winning Ashes side. “It’s turned out absolutely fine,” says KP. Oh, and the moon is blue.

How’s this for a good day at the office. When Robert Lewandowski came on to the field at halftime in the Bundesliga match between Bayern Munich and Wolfsburg, his side was 1-0 down.

Nine minutes later, Bayern Munich was 5-1 up, all off the boot of Lewandowski. But what I loved most was his coach’s reaction.

Another great story that’s been doing the rounds this week concerns a 29-year-old Roger Federer fan who woke from an 11-year coma stunned to find his hero is still making Grand Slam finals. Bet you never thought you’d read a sentence like that.

There are some doubts about the veracity of the story. But as they say in journalism, never let the facts get in the way of a good yarn.

So, you’re at the Singapore Grand Prix and you’re a litte bored. What do you do? Apparently you go for a wander on the track during proceedings.

“It looked as though he had come straight out of a nightclub,” said Red Bull’s team principal Christian Horner. The bloke faces six months in jail for his wayward stroll.

And finally, I leave you with another parody video, this one about women who wear exercise gear for everyday activities. It’s gold.

This is Kazblah signing off from a dodgy internet connection on the road at Crescent Head.

Have a good weekend, everyone. Don’t forget to do literally nothing in your activewear.