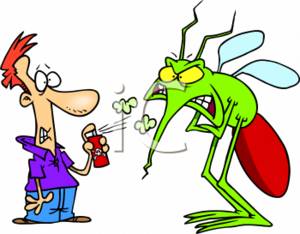 gency has been declared, women in certain countries are being told not to get pregnant and an Indian car company has had to rename a new vehicle originally dubbed the Zica.

But Australian athletes can rest easy. As they prepare to enter the Zika hot zone of the Rio Olympics, the Australian Olympic Committee has leapt into action — and signed a sponsorship deal with Bushman insect repellant.

Chef de Mission Kitty Chiller says the arrangement is ‘timely and beneficial to all athletes’.

No doubt it gives our athletes great comfort to know they’ll be entering a petri dish situation armed with nothing more than mozzie spray.

Oxford University scientists have a take no prisoners approach to the problem. Instead of mozzie repellent, they’ve opted for repellent mozzies.

They’ve engineered a strain of ‘killer Frankenstein mosquitoes’ that are basically programmed to starve to death. When they mate, they pass on this defective gene to their offspring, who also die. Now we’re talking!

Aussie rugby player Quade Cooper is one athlete hoping to be in Rio for the Olympic debut of rugby sevens.

He flew in all the way from France this week to take part in the Sydney Sevens tournament, only to be left out of the side.

Cooper admits he’ll have a hard time adapting to the different demands of the sevens game. “I am under no illusions that it is going to be difficult,” he says.

Think of it this way, mate. It’s just fewer teammates for you not to pass the ball to.

Wayne Bennett signed on as England’s rugby league coach this week, joining Aussie Eddie Jones, who coaches their rugby union side, Aussie Trevor Bayliss, who’s in charge of the English cricketers and all manner of Aussie coaches who have taken their adopted charges to Olympic glory.

All of which prompted Fox Sports to ask: “Can anyone in England coach anything?”

The International Cycling Union has confirmed the first case of mechanical doping with a concealed motor found inside the frame of a bike at the Cyclo-cross World Championships.

The bike’s rider, Belgian teenager Femke van den Driessche, resorted to an age old defence. “The bike was not mine,” she says. Which sounds a bit like this guy.

When rival players go to the free throw line, Arizona brings out the Curtain of Distraction, a black cloth from behind which clowns or men dressed as babies appear just as the shot is being taken.

This week it was Olympic swimming champ Michael Phelps behind the curtain, strutting his stuff in gold swimming trunks and all his Olympic bling.

It worked. Oregon States’ Stephen Thompson promptly missed both of his free throws.

See if you can spot the Olympian.

Boxer and serial abuser Floyd Mayweather says he’s been offered nine-figure sums to return to the ring but he’s not taking the bait.

“If I do get the itch to come back, it really won’t be for the money,” he says. “But I have to get paid. That’s why the nickname is Floyd ‘Money’ Mayweather.” But just to be clear, it’s not about the money, right?

Floyd, who’s currently on a speaking tour of the UK — I know, we live in a crazy world — also says that with 49 successive victories under his belt, he’s earned the right to be called the best ever.

We’ll stick with this guy if it’s all the same to you, Floyd. He’s injured a stone, hospitalised a brick. He’s so mean, he makes medicine sick.

Hats off to David Beckham, who  bought hot drinks for a paramedic and the patient she was treating on the street in central London.

Catherine Maynard says she was helping an elderly gent who had fallen when Becks walked past.

“Ten minutes later, he came back with a cup of coffee for me and a tea for the patient,” she says. “I was so chuffed.”

Our numpty of the week? We give a dishonourable mention to whoever crafted this headline at Tennis News: “Roger Federer has knee surgery, will skip two tournaments.” Skip? I don’t think so.

But the undisputed winner is this French rugby player, who broke his nose in a pre-game motivational head butt.

Have a good weekend, everyone. Stay motivated.