It may not be as bad as Guanabara Bay but something is clearly not right with the Olympic diving pool.

Athletes and spectators looked on aghast yesterday as the pool water turned into something resembling a dodgy creme de menthe concoction. 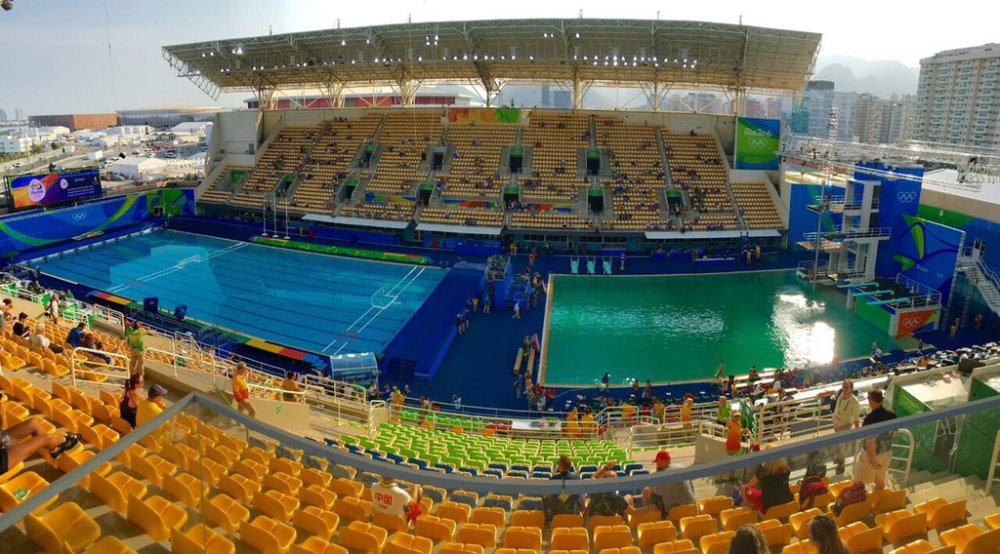 The people supposed to be in the know didn’t have the first clue what was going on. So they just made it up.

Nup, said British diver Tonia Couch. “I’ve never dived in anything like it,” she said.

And yet the women still dived in the 10-metre synchronised platform final. As if jumping from that height isn’t daunting enough.

Now the problem has spread to the water polo pool but at least they’ve got to the bottom of it. Apparently the tanks “ran out some of the chemicals” needed to treat the water. Ew.

Rio spokesman Mario Andrada says: “We probably failed to note that with more athletes the water can be affected in different ways.” Which is a pretty big oversight.

He promises the water will be blue from now on. But he’s the one that said there was no problem with Guanabara Bay or personal security in Rio.

I’m not buying it. For what it’s worth, my money’s still on this as the cause of the problem. Which means someone drank a LOT of Gatorade.

And while we’re on the diving…

In the swimming pool, which at the time of writing was still the proper colour, the Aussies added another bronze to their tally with a galant swim by Emma McKeon in the 200 metres freestyle behind superstars Katie Ledecky and Sarah Sjostrom.

But it was the old man of the pool, Michael Phelps, who stole the show with an incredible win in his pet event, the 200 metres butterfly, backing up an hour later to anchor the US men’s 4×200 metres really team to yet another gold.

Phelps’ individual gold also produced the picture of the day, with Chad le Clos clearly thinking: “Didn’t you retire?” in this shot.

Standing on the blocks for the his relay swim, with good buddy Ryan Lochte already halfway through his swim, disaster nearly befell Phelps when he ripped his swimming cap.

Calm as you like, he grabbed a teammate’s cap, flipped it inside out and off he went.

What a man breaking his swim cap can't even stop him #Phelps #USA #Rio2016 #swimming pic.twitter.com/tSmXITxvK1

So Phelps now has 21 gold medals to his name, including three this Olympics. If he was a nation, he’d currently be 10th on the medal tally for his Rio haul alone. At this rate, I reckon he’s got another eight Olympics in him.

It was a fairly low-key day for the Aussies, so we’re a bit light on for Aussie hoighloights.

Hopefully that will change when Kyle Chalmers and Cameron McEvoy swim the men’s 100m freestyle final in a few hours.

And right now, the Boomers are giving the world’s best basketball team a bit of a fright, leading the US by five points at half time.

Here’s how not to do horsey high-jumps. Just so you know.

Thought for the day

How Rio’s dealing with the Zika virus.