It’s one of my favourite clips so far from the Women’s World Cup.

Swiss striker Ramona Bachmann gets the ball at the halfway line, evades one, two, three, four, five defenders, then the goalie, sets herself for an angular shot at goal… and then falls over.

Not one of those I’m-in-the-penalty-box-so-let’s-milk-it-for-all-its-worth dives but a legitimate bonafide stack you don’t often see in soccer. See for yourself.

The Ramona Bachmann show, her 2nd wonderful highlight, shame neither has been a goal. Amazing dribble #sui #FIFAWWC pic.twitter.com/mHJL9rbhLp

While she can run through opponents like Lionel Messi, Bachmann seems to have a problem sharing the ball. In Switzerland’s World Cup debut against Japan, she tried to win it all by herself.

As SB Nation reported, she ‘single-handedly created about 12 dangerous attacks and single-handedly destroyed roughly 10 of them’. And Switzerland lost 1-0.

Still on the World Cup, there was a bit of post-match cyber biffo following the Matildas 3-1 loss to the United States.

For some reason, Football Federation Australia went rogue in its match recap, saying the Americans were ‘stuck in the past’, had a ‘bog-standard’ formation and ‘just aren’t that good’.

US website Deadspin took up the fight, dismissing the FFA’s rant as ‘the sourest of shiraz’ and ‘the sort of avoidance of personal responsibility I would expect from a nation of convicts’.

Hey, you guys voted for George W. Bush. Twice. Don’t talk to us about avoidance of personal responsibility.

Bak to convicts, FIFA’s vanity movie United Passions has broken all box office records, its $918 opening weekend in the US the worst EVER for a mainstream release.

The flick struggled to get 100 people through the doors. I’m guessing about 75 per cent of them were film critics and the rest meant to see San Andreas and walked into the wrong cinema.

Expect United Passions to be up for at least one Razzie in next year’s award season. In the meantime, vote for your favourite review in our exclusive poll.

The FIFA corruption scandal claimed an unexpected casualty this week, in the form of TV funny man John Oliver.

Like most of us, Oliver didn’t think for a moment that Sepp was about to go without being prised out with an industrial crowbar.

A reminder to us all to be careful what you wish for.

Meanwhile, FIFA communications director Walter De Gregorio — remember, ‘this for FIFA is good’ — learned the hard way not to make light of the woes of soccer’s ‘governing’ body.

During a TV interview, Walter told a joke about being in a car with FIFA president Sepp Blatter and secretary general Jerome Valcke.

“Who is driving?” he asked, pausing for effect before answering: “The police.”

Blatter asked for his resignation. Seems Sepp’s still in the driver’s seat after all.

It wasn’t all soccer this week. Stan Wawrinka’s very loud shorts won the French Open — and then held a press conference. 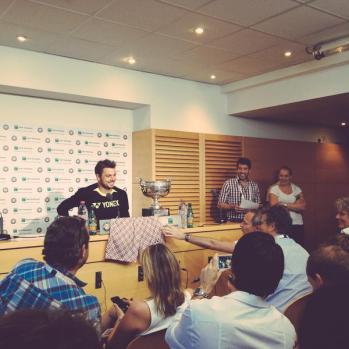 And yes, it does appear that a reporter may actually be fondling said shorts.

“It’s quite funny that they won the French Open,” said Stanimal. “I quite like them. Apparently I’m the only one.”

Hey, if you can’t beat ’em, blind ’em — and beat ’em that way. And at least you don’t have to get changed on your way to the golf course.

Jimmy Fallon had his own unique tribute to the French Open, which goes like this…

Finally, spare a thought for the Spanish bullfighter who was gored in the nuts this week.

“It was not such a big deal,” he said. “In the end I just needed to have my scrotum sewed.”

How many of us can say that at the end of a day’s work?

Have a good weekend.