When it comes to doping, the Russians make Lance Armstrong look like a weekend pill popper.

As the World Anti-Doping Agency decides whether Russia can compete at Rio, the bloke who ran Russia’s anti-doping lab has spilled the beans on a systemic doping program that operated during the Sochi Olympics.

Here’s how it worked.

Dope a whole bunch of athletes and stand back as Russia wins lots and lots of medals, 33 in all, including 13 gold, to top the medal tally, giving Vladimir Putin lots and lots of photo opportunities. Just not so much in the ice hockey.

In the meantime, get yourself a batch of clean urine samples. Obviously not from the athletic fraternity.

In the wee hours of the morning, do the old switcheroony, swapping the clean samples with the ones that glow in the dark.

The genius is in the simplicity. No need for blood transfusions or playing Russian roulette with pesky drug tests. 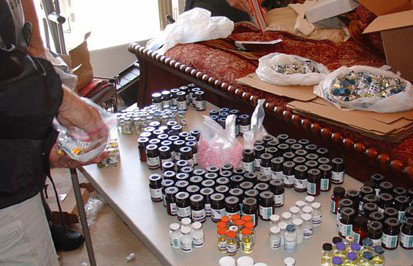 Olympic president Thomas Bach says if the claims are true, it represents a ‘shocking new dimension in doping’ and an ‘unimaginable level of criminality’.

Russian Sports Minister Vitaly Mutko has dismissed the claims as ‘a continuation of the information attack on Russian sport’, while a Kremlin chappy says it’s the ‘slander of a defector’.

Meanwhile, the claims are added to WADA’s long list of investigations into matters pertaining to Russian sport.

Not to be outdone in the skullduggery department, and perhaps smarting from a bit of relevance deprivation syndrome of late, FIFA is up to its old tricks.

The FIFA Council has just given itself the power to fire the watchdogs who try to keep soccer’s ‘governing body’ honest. Chief watchdog Domenico Scala promptly resigned.

So much for FIFA’s new broom.

Tiger Woods was busy assuring everyone at Congressional Country Club that his comeback from back surgery is coming along just swimmingly.

Then he hit three balls in the water.

Talking to players ahead of the Coppa Italia final against Juventus, the one bright spot in AC Milan’s season, Berlusconi told the squad: “We cannot keep being embarrassing.”

Then he threatened not to pay them. “You can try suing me. Do you know how long a civil court case usually takes in Italy? About eight years.” No stranger to the Italian court system himself, he should know.

Boxer Louis Norman went to great… ahem… lengths to make the weight in his bid for the vacant British flyweight title in Cardiff.

Initially 400 grams over the limit, Norman left nothing to chance — or to the imagination — returning to the scales completely naked to scrape into the fight again Andrew Selby. Which he then lost.

Out of interest, I weighed my knickers. Twenty-seven grams. We do the hard yards in research here.

While Rio has not had the easiest of Olympic build-ups, there is one area where it will surpass every host city that has come before it.

It’s laying on 450,000 condoms, three times more than were available in London, enough for every athlete to get their jollies three times a day.

With Zika virus now found to be spread by sexual contact as well as through mozzies, condoms have taken on a new significance these Games.

Australia’s shipping in its own special double strength anti-viral condoms to give our athletes extra protection.

Obviously telling athletes to keep it in their pants for a couple of weeks is not an option.

Last week, we showed you how Aston Villa fans protested their team’s relegation with a show of beach balls and blow-up dolls.

Here’s what they do in Turkey.

After a local parade in Leicester this week, the team’s Thai billionaire owner Vichai Srivaddhanaprabha flew them all to Bangkok, where they got an equally rousing reception.

Finally, check out the footy gear worn by Spanish fourth division side CD Palencia. It’s apparently meant to convey they have skin in the game.

Have a good weekend, everyone. Wear your heart on your sleeve.