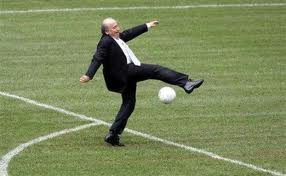 “Australia was a little bit offside.”

Interviewed for the ABC TV program Played, this was how FIFA boss Septic Bladder explained Australia’s failed bid to host the 2022 World Cup.

Which suggests Septic needs a crash course in the rules of soccer. Because you have to be on the actual field of play — and, indeed, a little too far ahead of the game — to be deemed offside.

And as the program so glaringly highlighted, we were nowhere near the action when the World Cup prizes were handed out.

The program raised a number of questions, not the least of which was how on earth Frank Lowy managed to build a global property empire. And, oh, that’s right, where is the $43 million we shelled out for the bid?

These are things we shouldn’t be worrying about, according to the head of soccer’s ‘governing’ body. After all, it’s just a game.

But at least Septic was able to shed some light on where Australia’s solitary vote came from.

“My daughter would never forgive me if I hadn’t voted Australia,” he says. So we know it wasn’t him.

Meanwhile, Lowy has obviously learned something from the bruising encounter. He’s just handed on the Football Federation Australia chairmanship to son Steven.

There were accolades aplenty for the late All Blacks great Jonah Lomu this week.

Among them was Mike Catt, the English fullback Lomu flattened on the way to the try line in the 1995 Rugby World Cup semi-final.

“I’ve got to thank Jonah for putting me on the map,” Catt told BBC radio.

Mate, he didn’t put you on the map. He buried you about a foot in it.

And let’s relive that moment one more time, shall we?

Runners of the Bangkok half marathon ended up running a two-thirds marathon after organisers accidentally added almost seven kilometres to the course.

The mistake occurred when officials directed half-marathon runners to make a U-turn at the wrong spot, forcing them to run 27.6 kilometres instead of the standard 21.1 kilometres.

Last year, the course was 19.7 kilometres. Which is reminiscent of the scene in the comedy The Games when organisers discover the 100-metre track is in fact 94 metres.

At any rate, organisers have found the perfect way to make amends. They’ve apologised. And they’re giving everyone a free commemorative ‘Finisher of 27.6 km’ t-shirt.

I can imagine the response that’ll get.

It’s a busy life being a tennis pro. Sometimes you don’t have time to get to the hairdresser.

Perhaps that explains why at the change of ends three games into his World Tour Finals match against Rafael Nadal, Andy Murray gave himself an impromptu trim.

He then lost in straight sets.

OK, so imagine you’re a model and you’re asked to lie face down while a radio host tees off from your butt.

There’s a few alarm bells going off, right. The first being the humiliation of having a golf tee in your arse. Quickly overtaken by your concern that the bloke wielding the club doesn’t play golf for a living.

Anyhow, for whatever reason Liz Dickson went ahead and did it. Here’s how that went.

Sporting a big bruise, Lizzy did what any self-respecting girl would do and called in the lawyers.

And this week, she settled her lawsuit for an undisclosed amount.

Have a good weekend, everyone. May it have a happy ending.