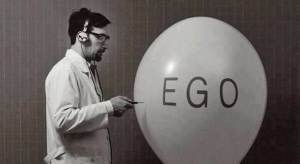 His fiefdom is rife with corruption, he himself is under criminal investigation and two World Cup bids get stinkier by the day.

But according to Vladimir Putin, this is all good reason for FIFA president Septic Bladder to be awarded the Nobel Peace Prize.

Septic has long harboured Peace Prize ambitions and this is not the first time Putin has sought to entertain them.

Brushing aside the mounting pile of excrement soccer’s ‘governing’ body is in, Vlad says Septic is a ‘very respected person’.

“He has always tried to treat football not as a sport but as an element of cooperation between countries and peoples,” he says. “He is the one who must be awarded the Nobel Peace Prize.”

Of course he is. How could we have been so blind?

Septic’s had his hands full fronting FIFA’s ethics committee over a £1.35 million payment made to UEFA president Michel Platini.

Judging by the look on his face as he left the hearing, things didn’t go too smoothly for the Sepptuagenarian.

Ever the sucker for a colourful phrase, Septic says the investigation into his ethical conduct is like the Inquisition.

In a letter to all 209 national football associations around the world, he proclaims his innocence, adding: “These proceedings remind me of the Inquisition.”

During the Inquisition, thousands of accused were summarily tortured and executed. So we can only hope.

As for the payment, he says: “I can assure you that it was legal because it was based on a verbal agreement.” So that clears up everything.

Still on soccer and reigning English Premier League champion Chelsea could change its name to All-at-sea after its dismal start to the season.

With the club perilously close to the relegation zone, officials dipped into the crisis management handbook, referred to point number one and sacked its manager Jose Mourinho.

Which would have been a shock to His Arrogance, who has spent the season pointing the finger at everyone but himself.

Only a few days ago, he was offering this suggestion: “One possibility is that I did an amazing job last season and brought the players to a level that is not their level and now they can’t maintain it.”

Another possibility is you’re just a tad deluded, Jose.

She may be Sports Illustrated’s sportsperson of the year but it seems a five-kilometre run is beyond Serena Williams’ capabilities.

Williams pulled the pin on her own Miami fun run at the two-kilometre mark and was caught hopping a taxi to the finish line.

“Oh no,” was the response of a Tennis Australia spokeswoman.

Down under, the Opposition used the story to describe some of Treasurer Scott Morrison’s comments about the government’s finances “as dodgy as Serena Williams in a charity fun run”. Boom-tish.

Did #SerenaWilliams take a taxi to the finish in her own fun run?

Cricketer Kevin Pietersen did an epic dummy spit on social media this week when he was chucked out of the Qantas lounge for wearing thongs.

First world problem, Kev. Now go and buy yourself some shoes, you bum. Or we’ll get Miss Piggy on to you.

And BTW, @Qantas! Thongs are an institution in this great country! GET A GRIP! Tired, jet lagged & just wanted to chill! #Muppets 😡

Also in the ego-knows-no-bounds category, West Indian cricketer Chris Gayle has written a newspaper column for The Age saying what an honour it is for teams to have him on their side.

Writing in the third person, always a worry, he says: “It’s a big thing for them to have Chris Gayle in the dressing room. It’s huge. Wherever I go around the world I always have a big, big impact. Players gravitate to me. I don’t know why.”

It seems to me that some of the people highlighted above have lost sight of the things that matter in life. Like this.

Have a good weekend, everyone. Feel the joy.